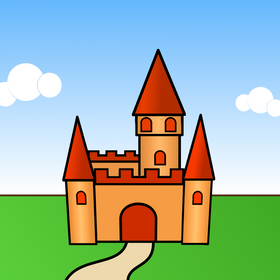 Castles Board Game is a very addictive tile based board game. In the game players try to build castles, roads and churches to earn points. But the resources are limited! You need your peasants to make sure you score points. When the tiles run out, the player with the highest score wins the game.

A simple card game where you combine three cards...

Block Puzzle is a game where you place blocks of different shapes and sizes..

To setup a new game, you tap 'New Game' in the main menu. Then you tap 'Local' (or 'Network' if you want to setup a game through the Game Center). In the next menu you tap on the player's name to change the name. By tapping the icons to the right of the name, you define whether a player is a human player or a computer player. If both the icons are black, the player does not take part in the game. In the video clip you get a quick overview of the game.

Points are awarded to the players with the most peasants in any given feature, all of the tied players are awarded the full number of points.

For churches, castles and roads, points are awarded for the number of tiles covered by the feature.

When a feature is scored during the game, all of the peasants on that feature are returned to their owners.

A Game in Play